Computex 2011—the annual technology expo held in Taipei, Taiwan—is one of the top three IT events in the world, and will be held this year from May 31 to June 5. This year, leading international motherboard and graphic card maker MSI will put on display its new N580GTX Lighting Xtreme Edition (N580GTX Lighting XE) at Booth L607 on 4F of the Nangang Hall. The new N580GTX Lighting XE comes equipped with a new Propeller Blade fan with "Smart Temp Sensor" and "Dust Removal" technologies as well as support for Afterburner's latest "Triple Temp Monitor" feature. The new technologies and comprehensive product lines on display are a testament to MSI's leadership in the graphics card market and our continual spirit of innovation

For Xtreme overclocking enthusiasts, the MSI Lightning series has always been the graphics card to die for. The N580GTX Lighting Xtreme Edition, which is being shown for the very first time at Computex this year, not only comes with a massive 3GB of graphics memory, but also incorporates the Propeller Blade fan featuring two new technologies (Smart Temp Sensor and Dust Removal) and Twin Frozr III cooling. The new graphic card also supports Afterburner's latest Triple Temp Monitor technology. The N580GTX Lighting Xtreme Edition’s combination of Power4 Architecture power supply and extreme overclocking design features unique to the Lightning series leave it the undisputed king of single-GPU graphic cards!

MSI continues to develop industry-leading cooling solutions to meet the needs of graphic card enthusiasts, and two new revolutionary fan technologies will be on display at Computex 2011 this year:

Smart Temp Sensor: When temperatures exceed 45 degrees, the unique coating on the fan will change from blue to white to warn users that the system might be running too hot and remind them to check the system’s cooling status

Dust Removal: When the system is turned on, the graphics card fan will rotate in the opposite direction for 30 seconds. By running in reverse, the fan helps to remove dust from the heatsink fins to ensure optimal cooling every time

New Unique Afterburner Features
MSI's proprietary Afterburner utility is the industry's most comprehensive and most powerful professional graphics card overclocking utility and has many followers in the media as well as followers among overclocking enthusiasts. This year's Computex will be used to showcase the latest feature added to Afterburner: Triple Temp Monitor for GPU/Memory/MOSFET.

In addition to the latest Triple Temp Monitor technology, Afterburner also comes with the “Predator” video-capturing feature. Gamers can use Predator to capture ingame video and then upload their clips to YouTube to relive their favorite moments. Other MSI-exclusive features supported by Afterburner include Triple Overvoltage, advanced fan-speed control and 5 types of overclocking profiles. Be sure to come experience it all for yourself by visiting the MSI booth at L607 in the Nangang Hall at this year's Computex! 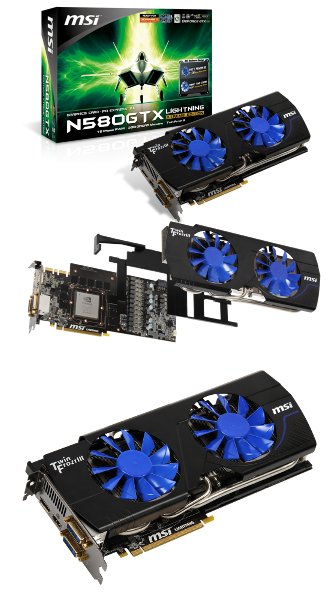