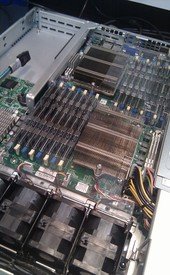 At AMD's ISC stand one could find several 2U and 4U servers built with older Opteron chips, but it was a 1U pizza box server made by Supermicro that housed two 16-core Bulldozer chips running live demonstrations of POVRay. This is the first time that AMD has publicly displayed its next generation Opteron processor, codenamed Bulldozer.

The chaps manning AMD's stand said that Bulldozer still has a Q3 2011 launch date and, judging by the fact that it has started to display working machines, we can assume that timeframe is not too optimistic. Asked whether AMD will be coming up with a Llano style Opteron featuring an accelerated processor unit (APU), AMD told The INQUIRER that "an Opteron APU still at least two years off".