The Tech Report found some information about Deccan, a 2012 AMD platform that will feature the 28nm Wichita and Krishna APUs. According to the leaked information, Deccan will use Bobcat cores that are about 20 percent faster than those found in the Ontario chip. The APUs will offer four CPU cores and a GPU component that is claimed to be 25 percent faster than Ontario's integrated graphics.

Due in 2012, the 28-nm chips will be a part of the "Deccan" platform. Interestingly, Deccan doesn't appear to include any other silicon—it looks like the chipset, or Fusion Controller Hub in AMD's parlance, will be brought into the APU.

According to the slide, Deccan's FCH will include Serial ATA and USB connectivity. The speed of the former isn't provided, but USB ports will be available in 2.0 and 3.0 flavors. Four PCI Express lanes provide a conduit for additional peripherals.

One slide hints the southbridge may be integrated into the APU as well, and it's also mentioned that lower TDPs target new form factors, which may hint at tablet applications. 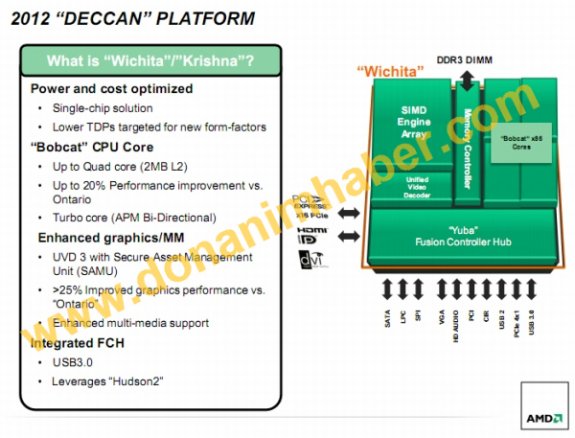