Razer, the world's leading high-end precision gaming brand, brings true pinpoint positional audio to hardcore gamers everywhere with the Razer Tiamat headset range – the world's first discrete 7.1 surround sound and 2.2 stereo gaming headsets. Get the tactical advantage in combat when you can hear and react to every gunfire, explosion and voice realistically all around you. And with bass so powerful, the Razer Tiamat will blow you away.

"The Razer Tiamat headset range is the pride of our audio engineering, the world's first 10 driver headset, built to deliver the most powerful, clear and accurately produced positional audio gamers will ever need for the competitive edge," said Robert "RazerGuy" Krakoff, President, Razer USA. "Surprise the enemy trying to creep up for a stealth kill, when you can hear their footsteps loud and clear behind you."

The Razer Tiamat 7.1 also gives gamers maximum customizability of their audio experience adjustable on a sleek control unit. You can precisely fine-tune the volume of every audio channel, position, and bass depth, as well as conveniently toggle between the headset's 7.1 surround sound mode, 2.0 stereo mode or external speakers as long as they are also hooked up to the unit, so you'll have the right setup for your entertainment at all times.

The Razer Tiamat 2.2 is outfitted with a total of 4 discrete drivers, 2 dedicated especially to bass to give your head that rumbling sensation every time you calmly walk away from an in-game explosion.

Both versions of the Razer Tiamat come with leatherette ear cushions to keep you comfortable during long-haul gaming marathons, and a precise, unidirectional noise-cancelling microphone so your battle chatter stays as sharp as your audio.

In line with Razer's announcement of their new Razer Tiamat headset range, the world's first 7 Razer Tiamat 7.1 gaming headsets are to be given away to 7 lucky winners.

About the Razer Tiamat 7.1
True pinpoint positional audio for the tactical advantage is the only way to go for victorious gaming, and that's what the Razer Tiamat 7.1 was built for. 10 discrete drivers, 5 in each ear cup produce 360 degrees true surround sound so you can hear and react to everything around you with three-dimensional clarity.

The versatile control unit lets you tweak every audio channel's volume and positioning, as well as bass depth to your exact preference. With a single button press, toggle between the headset's 7.1 surround sound, 2.0 stereo and external speakers when both are connected to the unit to have the right audio setup for your specific entertainment needs at all times. Packed with so many features in one device, the Razer Tiamat 7.1 is the ultimate beast of gaming audio.

About the Razer Tiamat 2.2
The Razer Tiamat 2.2 comes with 4 discrete drivers in the headset, 2 dedicated to bass to give gamers double the bass for double the impact. Chuck a grenade, launch a missile, detonate a nuke; everything from a simple explosion to an apocalyptic end-of-the-world type destruction is reproduced with amazing booming power. Throw in a sturdy build, exceptionally comfortable leatherette ear cups for wear over extended gameplay, and a precise unidirectional microphone for leading your team to victory - the Razer Tiamat 2.2 makes sure your epic gaming domination is aurally reproduced in all its glory. 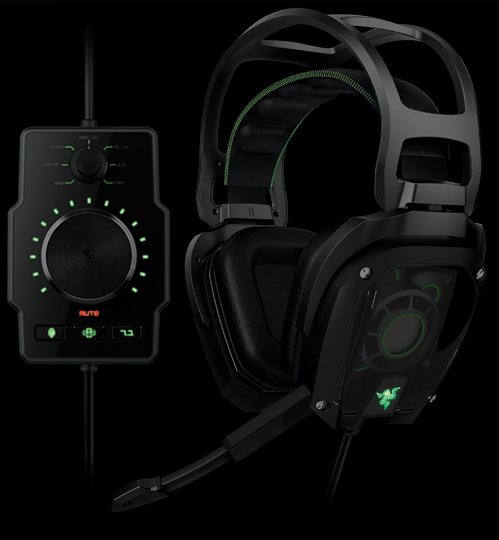