Many gamers these days reduce the number of cooling fans in their cases in order to build computers that run more quietly. However, having fewer fans in place ends up reducing airflow inside the case, which can lead to system instability from overheating. To overcome this problem, leading mainboard and graphics card manufacturer MSI has unveiled its exclusive Smart Temp Sensor Technology: A special coating on the fan now changes from blue to white when the ambient temperature exceeds 45°C (degrees Celsius), giving users a clear indication of their system's temperature. The Smart Temp Sensor Technology's color-changing fan allows hardcore gamers and users with quieter PC setups alike to check system temperature with just a glance and adjust the system's cooling for better stability. Choosing a MSI graphics card with Smart Temp Sensor Technology means no more problems with overheating systems.

Having Fewer Case Fans Makes Systems Run 12°C Hotter!
Gamers often reduce the number of cooling fans in their cases to reduce noise. This may provide a quieter environment, but it also reduces airflow within the case. A simulation was used to compare a system with its normal complement of fans and a gamer's system with fewer fans. When the graphics card was operating at a full load, the GPU and graphics card components were 9 degrees hotter, while ambient temperature inside the case jumped a full 12 degrees, to 49.2°C!1 Higher system and component temperatures can not only lead to system instability but will also shorten the product's lifespan as well. Proper airflow is therefore critical to reducing system temperature and avoiding system crashes from overheating. 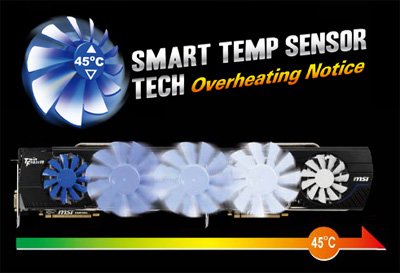