A longtime favorite of performance enthusiasts and overclockers around the world, AMD (NYSE: AMD) today announced it has achieved the Guinness World Record for the “Highest Frequency of a Computer Processor,” by overclocking the upcoming 8-core AMD FX desktop processor.

The AMD FX CPU, set to launch in the fourth quarter of 2011, achieved a top speed of 8.429 GHz, surpassing the previous record of 8.308 GHz. The record was set on Aug. 31, 2011, in Austin, Texas, by “Team AMD FX,” a group comprised of elite overclocking specialists working alongside top AMD technologists, who will also be named in the Guinness World Records.

“We applaud AMD for their entry into Guinness World Records® for achieving the Highest Frequency of a Computer Processor,” said Freddie Hoff, adjudicator for Guinness World Records, who is presenting the award today at the AMD Fusion Zone, a technology showcase in San Francisco, Calif. “We congratulate everyone involved in this record-breaking achievement.”

The record marks another accomplishment in the storied history of the FX brand, which represents amazing, unrestrained PC experiences that users can see and feel. All FX branded products, including the upcoming AMD FX CPU, will offer completely unlocked processor clock multipliers for easier PC enthusiast overclocking, and include exclusive AMD software through the AMD VISION Engine to fine-tune system performance. For FX branded processors, AMD has removed all the stops to enable a fully unlocked experience, giving overclockers and PC enthusiasts complete customization and flexibility. 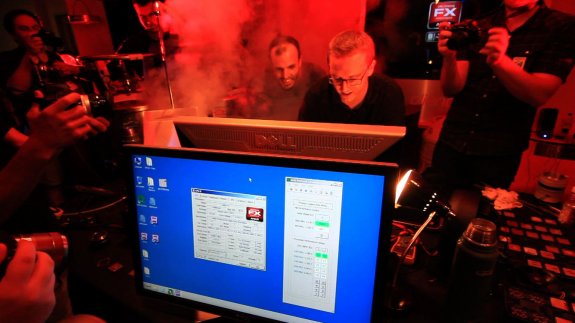 Video coverage of the event: