Posted on Monday, Jan 09 2012 @ 22:28 CET by Thomas De Maesschalck
XFX is the first video card brand to deliver custom Radeon HD 7970 cards. The XFX Radeon HD 7970 Core Edition is a reference model card with 925MHz core and 3GB GDDR5 clocked at 5.5GHz, while the Double Dissipation editions feature a custom dual-fan cooling solution. The regular DD model has the same clockspeeds as the reference model, while the Black Edition offers a 1000MHz core and 5.7GHz GDDR5.

XFX destroys the competition with the release of their AMD Radeon HD 7970s - the first in XFX’s all new Radeon HD 7000 Series range. Available in three staggering performance options - Core Edition, Double Dissipation and Black Edition Overclocked - XFX’s Black Edition and Double Dissipation models are the fastest single graphics cards in the world, offering up to eight percent faster performance speeds than any other graphics card on the market at a whopping 1000MHz core clock.

The HD 7970 Core and Double Dissipation Editions offer the best in high-end premium graphics, advanced 3D gaming, the fastest performance and best visual quality with the latest and most demanding games.

This new, ground-breaking series introduces XFX’s revolutionary 28nm Architecture which utilises the smallest GPU ever. The original redesign and improvement of the core architecture adapts not only to today’s gaming needs, but also overall computing performance. This massive leap raises the bar beyond today’s graphics performance with redefined features for the ultimate immersive experience. Utilizing AMD’s EyeFinity technology, the world’s first 28nm GPU chip provides improved texture and dynamic power management for uncompromised efficiency and performance across up to six displays.

The 28mn GNC Architecture enables a dramatic increase in processing power for better performance, while using less power and better transistor efficiency than previous generation technology. In addition, AMD and XFX brings gamers a plethora of new breakthrough technologies including the all new PCI Express 3.0 Gen 3 Bush Architecture with up to 32 GBs bandwidth and 8 GHz throughput, 384-bit Memory Bus and also up to 3 GB memory max on a single GPU. These new standards are just in time for the upcoming Gen 3 PC standardization.

With the HD 7970 graphics card, XFX introduces XFACTOR, a collection of features and technologies that include XFX’s exclusive designs and standards with the highest quality and innovation to ensure that even the most demanding gamers get the best from their graphics cards.

Ghost Thermal technology is the optimal thermal design that allows air to pass through the heatsink directly to the PCB and core components. This exclusive design allows fan speeds to be kept lower, while allowing the heat to dissipate evenly through the card without excess noise. XFX’s exclusive Ghost Thermal design is complimented by its highly efficient HydroCell thermal solution which is a vapor chamber based on the same principles as heat-pipe technology, which uses a recirculation process and wick system for vaporization. All of this combined with XFX’s award-winning Double Dissipation dual-fan design makes it one of the coolest and quietest cards on the market while simultaneously increasing overall graphics card performance.

The XFX AMD Radeon HD 7970’s App Acceleration technology goes beyond simply gaming and gives consumers certifiably spectacular video and high-quality performance when using everyday applications. From online video to MKV and Blu-ray to DivX, the AMD Radeon HD 7970 ensures supercharged performance – do it all faster and better than ever. With AMD’s HD3D technology, view the latest games and hottest Blu-ray movies in immersive stereoscopic 3D. Experience games with rich and interactive play and movies in full stereo 3D with support for Dolby TrueHD and 3D HDTV to create a theater-quality experience. 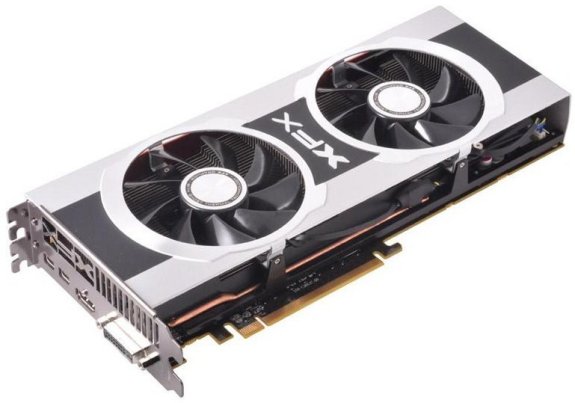