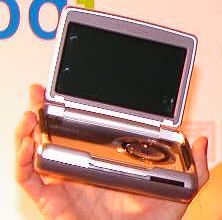 PQI's mPack P600 plays the leading role at this product launch. It is an all-around PMP player with gaming capabilities and GPS & Navigation functions making it the ideal companion for in-car entertainment.

The mTrix is designed targeted at the female consumers, small and easy to use. Weighing in at 110g, it is the perfect PMP for ladies and with an expansion slot for Intelligent Stick / MMC /SD cards, one can playback their favorite movies, music or view pictures on the mTrix.

The mPack P500's biggest draw card is its built-in digital camera at 3.2 megapixels and 5GB worth of storage space, it is a irresistible and tempting PMP product you want to get your hands on.

Additional details and specs can be found here