Posted on Thursday, February 09 2012 @ 22:37 CET by Thomas De Maesschalck
Legit Reviews reports AMD pulled a new marketing stunt by sending journalists a package with a prescription bottle from AMD with 28 "Verdetrol" 1GHz pills. It seems to be a marketing campaign for the upcoming Radeon HD 7770 "Cape Verde", which is said to run at 1GHz. Interestingly, AMD even went through the trouble of creating a Verdetrol mini-site.

The bottle says that the pills are for natural performance enhancement and that we are to give our video card 1 tablet by the fan intake four times a day. This is obviously a marketing promotion for an upcoming product release of a video card that is clocked at 1GHz. The AMD Radeon HD 7770 (Cape Verde) is said to run at 1GHz, so this could mean that the Radeon HD 7770 is very close to launching. The label on the bottle was well done with 28 doses (28nm manufacturing process), a prescription number of 1337-2012 (if you don't know what 1337 means hit alt+f4) and that the tablets are 1GHz (the core clock speed of an upcoming product). We'll let you guys guess the meaning of Verdetrol, but NVIDIA's colors are green. 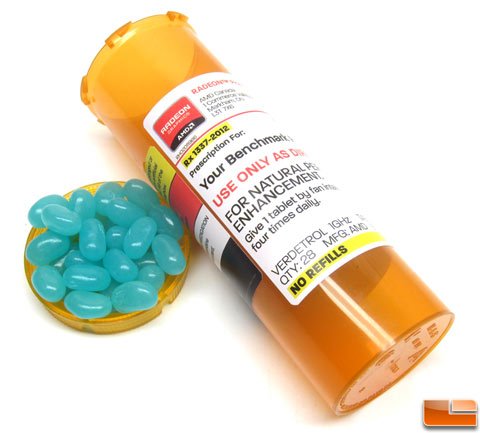