Posted on Friday, February 17 2012 @ 22:18 CET by Thomas De Maesschalck
ASRock cooperated with Creative to introduce the Game Blaster, a new audio card with Broadcom Gigabit LAN. It's a proprietary product though, it's only supported by ASRock's X79 based motherboards. Pricing and availability is unknown.

Gamers need so much more from their rigs. ASRock Game Blaster was designed to exceed the expectations of even the most dedicated gamer. It is the first sound card coming with both Creative 7.1 CH HD Sound Core3D Audio and Broadcom Gigabit LAN in the world.

Scout Mode™
Designed for performance gaming, ASRock Game Blaster also supports the state-of-the-art Scout Mode™ technology. It is a proprietary technology that allows you to hear your enemies from further away, giving you a distinct tactical advantage in combat. With Scout Mode™, ASRock Game Blaster facilitates faster access in the heart of battle and allows gamers to get precise control to elevate their games. Can't wait to enjoy this exciting technology? Simply download the latest driver from ASRock website, and experience this amazing tool right now. (http://asrock.com/mb/spec/card.asp?Model=Game Blaster&cat=Beta) 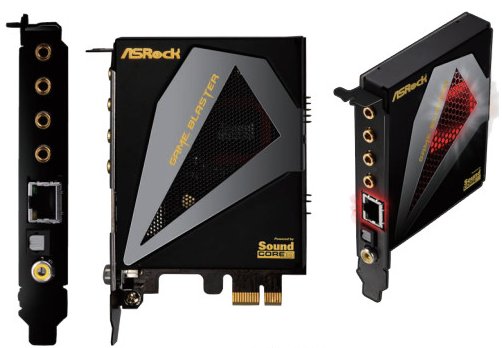