Microsoft has released the public beta version of Windows 8, you can download it at http://preview.windows.com. The Consumer Preview is offered in English, German, French, Japanese and Chinese, and is available in a 32-bit and 64-bit edition.

“With Windows 8, we reimagined the different ways people interact with their PC and how to make everything feel like a natural extension of the device, whether using a Windows 8 tablet, laptop or all-in-one,” said Steven Sinofsky, president of the Windows and Windows Live Division at Microsoft. “The Windows 8 Consumer Preview brings a no-compromises approach to using your PC.” 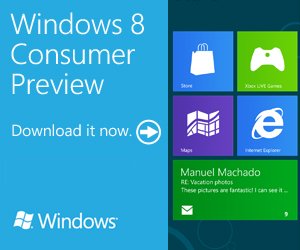