Posted on Monday, Mar 12 2012 @ 22:42 CET by Thomas De Maesschalck
Details about the Asus 13.3" UX31A and 11.6" UX21A Zenbook ultrabooks were published by The Verge. These systems will feature low-voltage 17W TDP Intel Ivy Bridge processors, from Core i3 up to Core i7, up to 4GB DDR3L 1600MHz memory, integrated graphics, a 256GB (perhaps also 512GB) SATA 6Gbps SSD, Intel Wireless Display (WiDi) support, 802.11n WiFi, Bluetooth 4.0, SDXC memory card reader, two USB 3.0 ports, Micro-HDMI output, and a backlit keyboard. Battery life is said to be up to six to seven hours for the UX31A and around five hours for the UX21A.

Both models will offer various LCD screen options, with the most expensive one being an IPS screen with a 1920 x 1080 pixel resolution and 350 nits brightness.

Externally, neither the UX31A nor UX21A should look terribly different from its predecessor, both are maintaining the same thickness and weight as previously (18.3mm and 1.3kg for the 13-inch model, and 17mm and 1.1kg for the 11-incher). Prices should begin around $1,050 for the UX21A and $1,100 for the UX31A. Asus hasn't yet settled on a release date, but we should expect to see these on sale around the same time as all other laptop vendors make the move to Ivy Bridge. 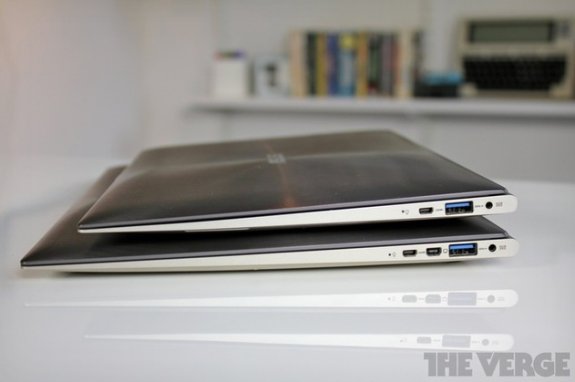 Additionally, The Verge also published details about the Zenbook UX32Vd and UX32A, two "budget" 13.3" ultrabooks with a price range of $800 to $1,100. The first batch of shipments will be Sandy Bridge based but later the series will be upgraded to Ivy Bridge, with Core i3-3217U, i5-3317U, and i7-3517U processor options. Both models can be shipped with the same 1080p IPS screen from the more expensive Zenbooks, and interestingly the UX32Vd will also include a switchable NVIDIA GeForce GT620M 1GB graphics card.

Like the UX31A, the battery is supposed to last between six and seven hours, and all models come with the option of either 2GB or 4GB of RAM. Unfortunately, it looks like the 256GB solid state drive isn't included: instead, you'll get up to a 500GB HDD with a 24GB SSD cache. There's also a little extra weight — these weigh 1.45kg, slightly more than the UX31A — but both are still quite thin at 18.3mm.