Posted on Monday, Mar 19 2012 @ 16:20 CET by Thomas De Maesschalck
HotHardware offers pictures of a retired World of Warcraft server that was sold by Blizzard as part of an auction to benefit St. Jude Children's Research Hospital. You can view it over here.

Maybe you're addicted to World of Warcraft and spend every free moment immersed in the most popular massive multiplayer online role-playing game (MMORPG) of all time, wandering through Azeroth doing whatever it is WoW players do. I wouldn't know, but I assume it's a lot of questing and raids.

As popular as WoW has become, I've never set virtual foot in Azeroth. Not once. That's okay because WoW is doing just fine without my participation. There are WoW subscribers in all corners of the globe, and it takes a massive amount of gear to host all the different game worlds, or realms, as they're referred to. Each realm is hosted on its own server, and in late 2011, Activision Blizzard began auctioning off retired server blades from the days of yore to benefit the St. Jude Children's Research Hospital. This was a chance to own a piece of gaming history even if, like myself, you never actually played WoW, and to add a few points to your philanthropy skill set and level up your personal character at the same time... 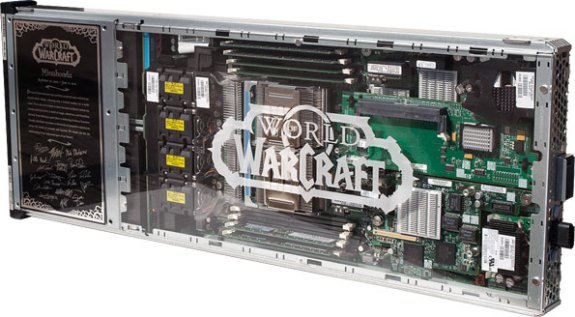