Posted on Tuesday, May 29 2012 @ 16:34 CEST by Thomas De Maesschalck
Noctua announced a partnership with RotoSub to create the first PC fans with active noise cancellation (ANC). A prototype of the technology will be showcased at next week's Computex.

Active Noise Cancellation (also referred to as Active Noise Control or Active Noise Reduction, ANC) is the technique of using sound waves to reduce noise by means of an effect called phase cancellation or destructive interference. Lars Strömbäck and Mårten Oretorp from RotoSub have invented a system (RotoSub Active Noise Control, R-ANC) that allows a fan to emit the sound signal that cancels out the original sound of the fan and thereby greatly reduces the overall noise emission.

"Mårten Oretorp and Lars Strömbäck's invention is a milestone in the field of noise reduction", says Mag. Roland Mossig, Noctua CEO. "It has always been our goal to push the boundaries of acoustic optimisation and this partnership will allow us to reinforce our technology leadership in the field of premium grade PC cooling equipment."

RotoSub's patented ANC technology makes it possible to achieve performance/noise ratios that cannot be accomplished by means of conventional aerodynamic or acoustic optimisations. The licensing agreement with RotoSub will allow Noctua to strengthen its position as a forerunner in quiet PC cooling by pioneering PC fans and CPU coolers with RotoSub ANC technology.

"Noctua is widely recognised as a leader in quiet PC cooling, so they were the obvious candidate when we were looking for a partner to commercialise the technology we've invented", says Lars Strömbäck, RotoSub CEO. "The performance and quality of their fans is one of the best in this industry and their new NF-F12 fan with its FocusedFlow system is ideal for integrating our ANC technology."

Introduced in late 2011, Noctua's NF-F12 FocusedFlow™ fan has quickly built up an excellent reputation for its superior quiet cooling performance and received more than 120 awards and recommendations from international hardware websites and magazines. The new joint development project with RotoSub pursues the ambitious target of providing another significant step up in performance.

"Our performance target is to achieve about 80% more airflow and 120% higher static pressure at the same noise level as the original NF-F12", explains Mårten Oretorp, RotoSub CTO. "There is still a lot of fine-tuning to be done, both in structural design and as far as the algorithms that compute the anti-noise signal are concerned, but we're working hard to achieve this goal within the next 12 to 18 months." 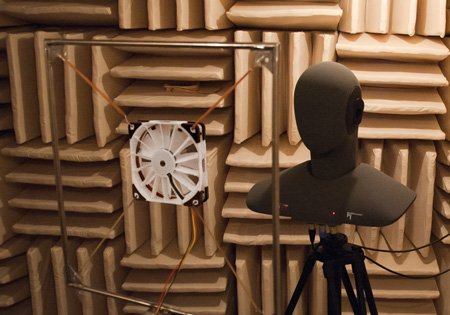