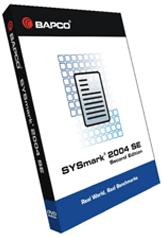 The new release also incorporates all other previously released updates and patches released for SYSmark 2004, allowing users a unified installation process for both 64 and 32-bit Windows platforms.

SYSmark 2004 SE is an application-based benchmark that reflects usage patterns of business users in the areas of Internet Content Creation and Office Productivity.

SYSmark 2004 SE and SYSmark 2004 are used by PC OEMs, hardware and software developers, IT departments, system integrators, publishers and testing labs as well as Information technologists and computer industry analysts.

BAPCo's SYSmark 2004 SE builds upon its predecessors utilizing the strongest and broadest development team in PC benchmark history. BAPCo's depth of membership represents the breadth of the computing industry and harnesses a consortium of experts.