Intel switching ultrabooks from mSATA to PCIe SSDs by 2014

Posted on Friday, Sep 14 2012 @ 17:19 CEST by Thomas De Maesschalck
Intel also confirmed at the IDF in San Francisco that future ultrabooks will dump the mSATA interface in favor of PCI Express SSDs. The chip giant said PCI Express SSDs will become part of the ultrabook platform in 2014 because mSATA will not be able to keep up performance-wise. These new ultrabook drives are defined in the Next Generation Form Factor (NGFF).

As Intel launches its Shark Bay ultrabook chipset the firm will incorporate support for PCI Express SSDs and reference designs for what the firm calls Next Generation Form Factor (NGFF) SSD modules. Intel showed off physical specifications for four designs that it expects to be deployed in specific use cases such as storage SSDs and cache SSDs.

Intel principal engineer Amber Huffman said "the SATA interface simply doesn't scale" with the bandwidth requirements posed by SSDs. She added that SSDs could saturate SATA3 interfaces at the launch of the Shark Bay chipset while proclaiming that "mSATA on the ultrabook is dead". 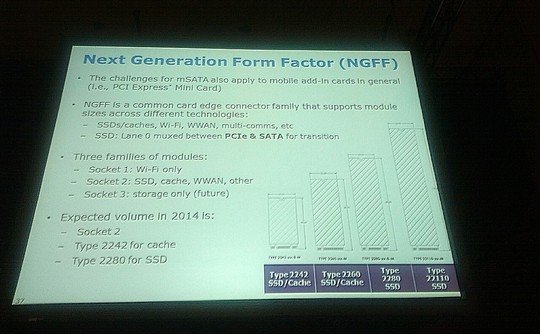