Posted on Wednesday, Nov 07 2012 @ 11:56 CET by Thomas De Maesschalck
Microsoft's Windows is without a doubt the best operating system for gamers, but if some game publishers like Valve have their way this may change in the future. Valve's Gabe Newell thinks Windows 8 is a disaster for PC gaming and the company is increasingly boosting its support for Linux. Valve cooperated with NVIDIA on a new, higher-performance GeForce driver for Linux, which was released yesterday, and the company also announced it started a limited access beta test of its Steam client for Linux.

At present, the Linux edition of Steam contains 26 games, including titles like Team Fortress 2, World of Goo, and Serious Sam 3: BFE. Another limitation is that the client is currently only available for Ubuntu 12.04, support for more popular distros will be added in the future.

-Valve, creators of best-selling game franchises (such as Counter-Strike and Team Fortress) and leading technologies (such as Steam and Source), today announced the launch of a limited access beta for its new Steam for Linux client.

“This is a huge milestone in the development of PC gaming,” according to Gabe Newell, Valve President and co-founder. “Steam users have been asking us to support gaming on Linux. We’re happy to bring rich forms of entertainment and our community of users to this open, customer-friendly platform.”

The Steam for Linux Beta client is currently available for installation on Ubuntu 12.04. “An overwhelming majority of beta applicants have reported they’re running the Ubuntu distro of Linux,” according to Frank Crockett, a member of the Steam for Linux team, “We intend to support additional popular distros in the future; we’ll prioritize development for these based on user feedback.”

Within its first week, Valve received over 60,000 responses to its request for participants in the Steam for Linux Beta. The first round of beta participants has been selected from this group of respondents.

Steam is a leading platform for the delivery and management of PC and Mac games with over 50 million accounts around the world and over 2,000 titles offered.

More details regarding Steam for Linux, including community discussion, beta participants’ feedback, official announcements and syndicated news can all be tracked on the new Steam for Linux Community Hub at http://steamcommunity.com/linux. 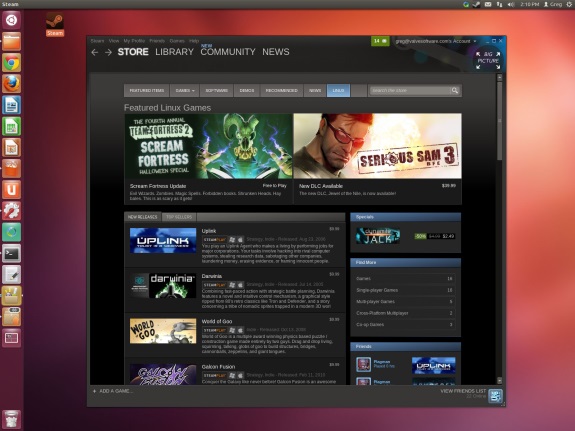