Posted on Thursday, Nov 08 2012 @ 16:50 CET by Thomas De Maesschalck
NZXT announced it will make 15mm fan spacing the standard on all of its future cases and radiators. The Phantom 820 already has this fan spacing specification, and new versions of the Switch 810 have a revised top steel panel that allows for both 15mm and 20mm spacing.

Following the introduction of the 280mm Kraken X60, NZXT is officially adopting the 15mm fan spacing specification for 140mm radiators. Prior to this, all NZXT cases with 140mm radiator support had fans placed 20mm apart. This was due to a split standard in the industry, leaving some radiator and case manufacturers supporting fans with 20mm spacing while others supported 15mm spacing. Since the 15mm specification has grown to become the widely accepted standard among many companies due to the facilitation of a shorter radiator with better cooling efficiency, NZXT will now adopt the 15mm spacing specification on all future projects.

We would also like to address some concerns this change may bring regarding our previously released products:

- Switch 810 has already begun production with revised top steel panels which allows for both 15mm and 20mm spacing.

- Phantom 410 and Tempest 410 will happily accept the Kraken X40; however they will not be able to natively support the Kraken X60 due to their inherent hole spacing.

At the moment, NZXT’s Switch 810 will be the only case receiving revised top steel panels for native Kraken X60 support. If you already own a Switch 810 and wish to purchase an NZXT Kraken X60, you may contact NZXT Support (http://nzxt.com/support) for a free replacement. The revised steel panels utilize screws for its installation, allowing users to easily replace the top steel panel with a standard Phillips head screwdriver.

For a complete list of Kraken X40 and Kraken X60 compatibility for both NZXT products and its competitors, please see the table below. 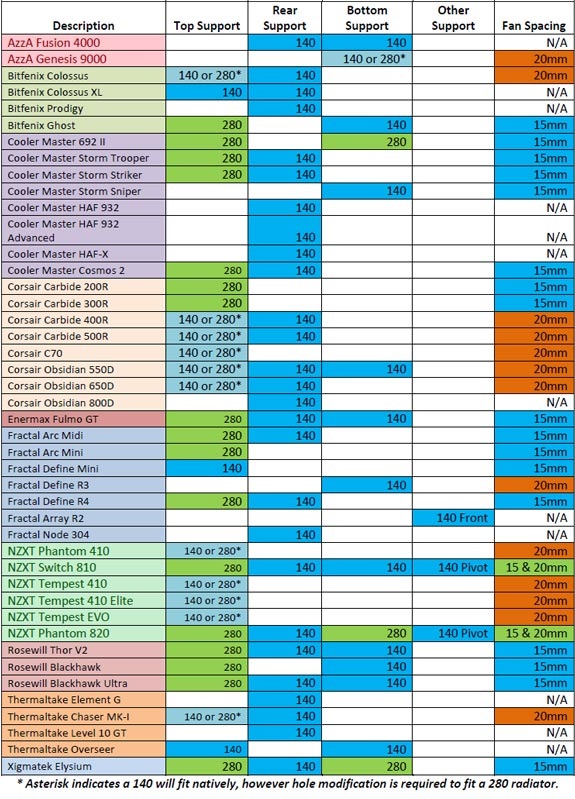