Compared: HDD pricing a year after the Thai floods

Posted on Friday, Nov 09 2012 @ 10:52 CET by Thomas De Maesschalck
The Tech Report has published an updated HDD pricing chart to track the evolution of HDD prices since the Thai floods, which devastated the HDD market in October 2011. The chart reveals that the pricing of most HDDs is still vastly higher than they were before the flood, only 2.5" drives seem to be an exception. The site notes that pricing of the notebook drives fell by 5 percent on average, while desktop drives cost 35 percent more than they did in October 2011.

The notebook drives cost more per gig than their desktop counterparts, which is to be expected. Only a couple of them slip below 10 cents per gigabyte. Low-power drives like the Barracuda Green and Caviar Green dominate the top of the chart, with per-gigabyte costs around five cents. Seagate's 7,200-RPM Barracudas aren't far behind, though, and the Deskstar 7K4000 4TB is only 7 cents/GB. With SSDs still running more than about 70 cents/GB, it's easy to see why mechanical storage still has a place in today's PCs. 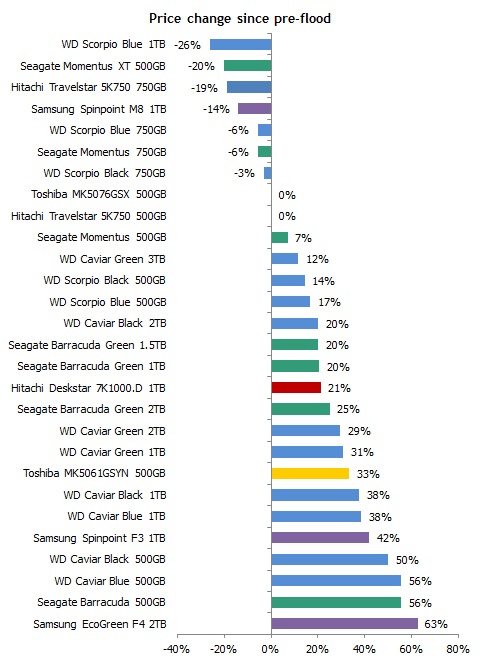