Posted on Friday, Nov 30 2012 @ 16:29 CET by Thomas De Maesschalck
Dell has introduced the XPS 13 Developer Edition, an Ubuntu 12.04 based notebook previously known under the "Project Sputnik" codename. This new high-end laptop 13.3" laptop packs Intel Ivy Bridge series Core i5 and i7 processors, 8GB DDR3-1600, a 256GB SSD, integrated graphics and unfortunately a 1366 x 768 pixel screen. Shipments will start around December 11, 2012, you can currently pre-order it at Dell for $1,449. The price is about $50 less than an equivalent Windows-based XPS 13.

However, Dell is changing that. Earlier this year, they announced a pilot program, "Project Sputnik," intended to produce a bona fide, developer-focused Linux laptop using their popular XPS-13 Ultrabook as base hardware. The program turned out to be a rousing success, and this morning Dell officially unveiled the results of that pilot project: the Dell XPS 13 Developer Edition.

The laptop comes with Ubuntu Linux 12.04 LTS plus a few additions. Dell worked closely with Canonical and the various peripheral manufacturers to ensure that well-written, feature-complete drivers are available for all of the laptop's hardware. Out of the box the laptop will just work. They also have their own PPA if you want to pull down the patches separately, either to reload the laptop or to use on a different machine. 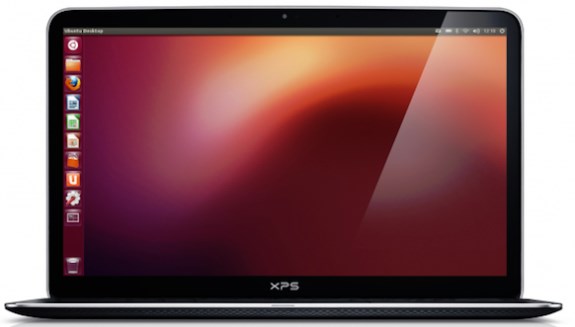