Posted on Thursday, December 06 2012 @ 19:00 CET by Thomas De Maesschalck
Toshiba introduces the e-STUDIO 306LP/RD30 printer, world's first printer that can erase text and images on printed documents, allowing paper to be reused. To achieve this, the printer uses a special toner that produces an erasable colour that is removed from the paper when passed through at a high temperature. Shipments will start in Japan in February 2013, the global launch will follow soon after.

The result is that paper can be reused multiple times, instead of binned after a document is no longer needed. A page recycled five times would result in a 57 percent reduction in CO2 emissions for the entire printer system. It will also save businesses a significant amount in paper costs.

Toshiba claims it has always attempted to produce eco-friendly printing options, reducing the size and weight of printers, as well as making them more energy efficient, but the ability to reuse paper marks a major step forward. The printer is also made using bio-based plastics instead of traditional petroleum-based plastics, further reducing the device's carbon footprint by 20 percent. 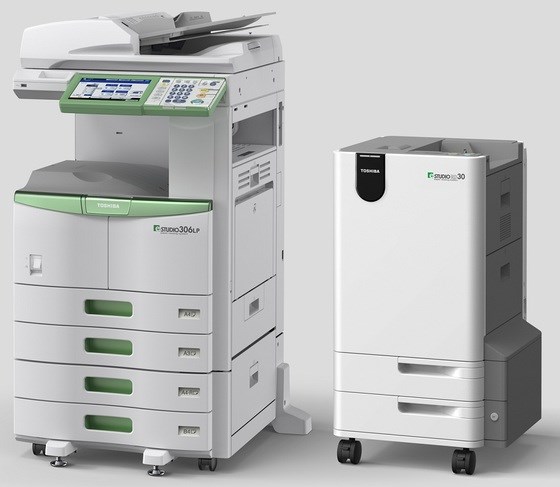