Sea levels are rising - but why?

Posted on Saturday, Jul 09 2005 @ 06:54 CEST by Thomas De Maesschalck
NASA has been monitoring and measuring world's sea levels for some years and found out that in the 20th Century sea level rise was about two millimeters per year. They claim that only a quarter of this was due to expansion caused by warming of the oceans.

"We've found that the largest likely factor for sea level rise is changes in the amount of ice that covers Earth. Three-fourths of the planet's freshwater is stored in glaciers and ice sheets, or about 220 feet of sea level," said Dr. Eric Rignot, Principal Scientist for the Radar Science and Engineering Section at NASA's Jet Propulsion Laboratory. 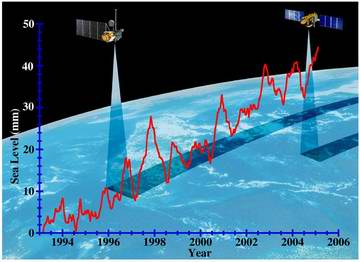