X-bit Labs got its hands on leaked documents that reveal Intel's Haswell processor will be further delayed. Previous rumors pointed to an April 2013 launch date, but the new information suggest the introduction will now be between May 27 and June 7. In the document, Intel also commands its partners not to sell, ship or advertise Haswell chips until June 2, 2013.

While the launch of highly-expected code-named Haswell products will occur later than originally expected, the amount of chips for notebooks that will be made available will be higher. Originally, Intel planned to launch only three premium mobile products powered by Haswell architecture; according to the new plan, that number grows to seven, thanks to models Core i7-4702MQ, Core i7-4702HQ, Core i7-4700MQ and Core i7-4700HQ. The desktop lineup will be as broad as expected earlier this month.

A reason for the delay isn't provided, but the site heard from one of its sources that it could be because Intel's partners are still stuck with a large inventory of Ivy Bridge chips and need more time to clear their stock. 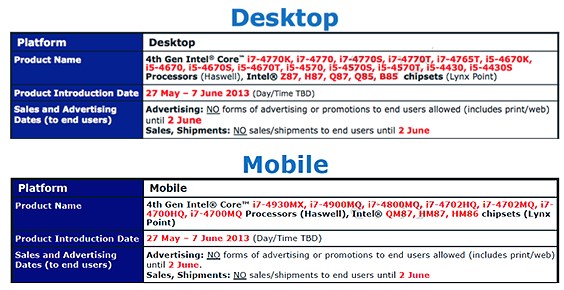