Posted on Monday, Jan 07 2013 @ 10:13 CET by Thomas De Maesschalck
No news about the next-generation GeForce GPU but one of the surprising announcements from NVIDIA at the company's CES press conference is "Project Shield", an Android-based handheld gaming device with the company's Tegra 4 SoC and a 5" screen with a 1280 x 720 pixel resolution.

The portable gaming console features an integrated, ergonomic game controller that seems like a mix of the controller of the Xbox 360 and the PS3. A beefy 38Wh battery promises up to ten hours of gaming or 24 hours of video playback, and the device also has integrated speakers, Micro-USB, Micro-SD memory slot and Micro-HDMI.

Perhaps even more exciting is that Project Shield can tap into the power of a nearby PC and be used as a wireless game receiver. If you have a PC with a GeForce GTX 650 GPU or higher, you will be able to stream the game data over your home network, and play PC games on your Project Shield device. NVIDIA also announced that Project Shield supports Valve's Big Picture modus.

Project Shield is anticipated to hit the market in Q2 2013 with a price tag "comparable to other gaming handhelds".

NVIDIA today announced Project SHIELD, a gaming portable for open platforms, designed for gamers who yearn to play when, where and how they want.

Created with the philosophy that gaming should be open and flexible, Project SHIELD flawlessly plays both Android and PC titles. As a pure Android device, it gives access to any game on Google Play. And as a wireless receiver and controller, it can stream games from a PC powered by NVIDIA® GeForce® GTX GPUs, accessing titles on its STEAM game library from anywhere in the home.

"Project SHIELD was created by NVIDIA engineers who love to game and imagined a new way to play," said Jen-Hsun Huang, co-founder and chief executive officer at NVIDIA. "We were inspired by a vision that the rise of mobile and cloud technologies will free us from our boxes, letting us game anywhere, on any screen. We imagined a device that would do for games what the iPod and Kindle have done for music and books, letting us play in a cool new way. We hope other gamers love SHIELD as much as we do."

Project SHIELD combines the advanced processing power of NVIDIA Tegra® 4, breakthrough game-speed Wi-Fi technology and stunning HD video and audio built into a console-grade controller. It can be used to play on its own integrated screen or on a big screen, and on the couch or on the go.

Tegra 4 at Its Heart
At the core of Project SHIELD is the world's fastest mobile processor, the new NVIDIA Tegra 4, which delivers enormous power from its custom 72-core GeForce GPU and the first quad-core application of ARM's most advanced CPU core, the Cortex-A15. These, combined with its battery-saver core and energy-saving PRISM 2 technology, deliver hours of gameplay on a single charge.

Windows and Android Games
Windows and Android are the world's most successful computing platforms, with massive ecosystems of system and software developers. While not specifically designed for gaming, both open platforms have drawn gamers by the millions. Project SHIELD is designed to allow them to enjoy Android and Windows games in a new, exciting way.

Project SHIELD can instantly download Android games, including Android-optimized titles available on NVIDIA's TegraZone™ game store, which has already delivered more than 6 million downloads to gamers. It can also be used as a wireless game receiver to a nearby PC equipped with an NVIDIA GeForce GTX 650 GPU or higher.

Project SHIELD can also access Android apps such as Hulu, Netflix and Slacker Radio, so users can enjoy their movies and music anywhere without expensive, clumsy wired or wireless speakers. 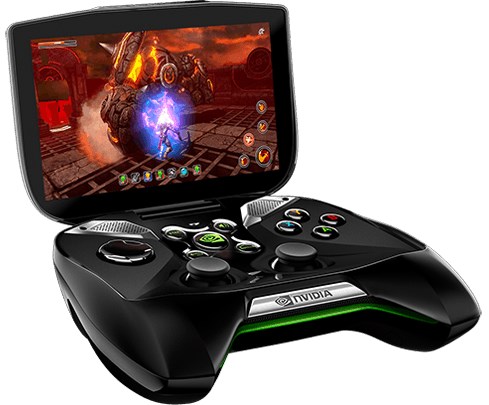 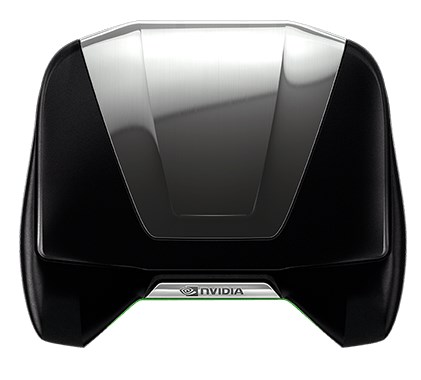 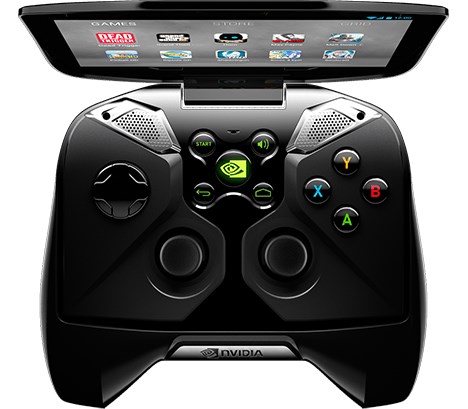