Rambus shows off a LED light bulb at CES

Posted on Monday, Jan 14 2013 @ 12:40 CET by Thomas De Maesschalck
EE Times reports Rambus jumps into the lightbulb market with a "completely reinvented LED bulb" that has an open top to allow for thermal dissipation. Shown at CES, the company claims its LED bulb uses close to one-quarter the power of a traditional incandescent bulb while lasting up to 25 times longer. On top of that, Rambus touts its bulb has a very low bill of materials, ensuring that its product would cost less than any other bulb on the market.

The firm said the bulbs were also unique in terms of their “fundamentally different” design, which includes an open top to allow for thermal dissipation.

The bulb family also boasts Rambus’ MicroLens optical technology, allowing for the use of a cylindrical light guide inside the bulb to produce a consistent, spherical distribution of light. MicroLens optics are already used in backlighting cell phones, computer screens, televisions and other displays.

Rambus said it has also designed the bulbs to have a very low bill of materials, ensuring the product would cost less than any other bulb on the market. 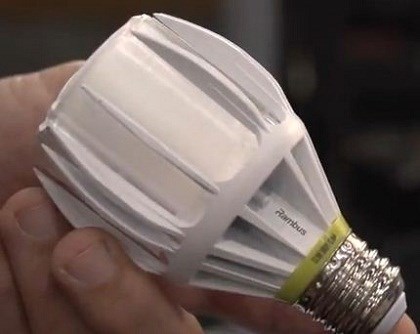