Posted on Wednesday, Jan 23 2013 @ 13:13 CET by Thomas De Maesschalck
Legit Reviews noticed that someone has put an Intel Ivy Bridge-E series engineering sample up for sale on eBay. Expected to be launched in Q3 2013, these new LGA2011 chips should fit in current motherboards after a BIOS update. The seller seems to have a full tray but mentions that the chip doesn't boot up (which may be because the motherboard doesn't recognize it).

The new IVy Bridge-E processors are said to introduce IPC improvements, PCI-Express Gen 3.0 certified root complex (one which NVIDIA will approve of), higher CPU core clock speeds, and support for faster memory. Let's just hope that Intel uses flucless solder on the integrated heat spreader and not thermal paste! If you can't wait half a year for the new processors to come out we ran across what appears to be an Intel Ivy Bridge-E processor on Ebay for $166.50 plus shipping! The Ebay seller appears to have a whole tray and the Q-Spec code on the processor for sale is Q1DF and it is clearly an early engineering sample. He claims that it fits in his LGA2011 board, but won't boot. The question now is what, if any, motherboards have a BIOS available for these early ES processors! 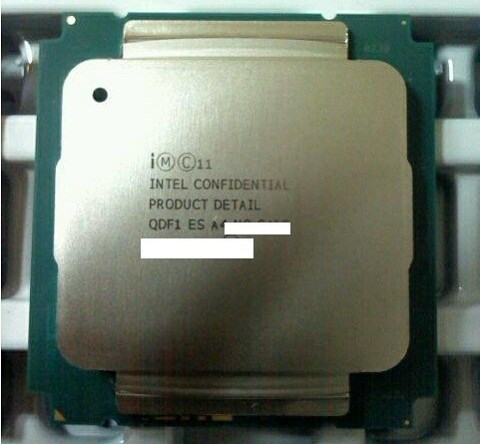