Posted on Friday, Feb 01 2013 @ 15:45 CET by Thomas De Maesschalck
A new report by W3Techs found that PNG is now used on 62.4 percent of all websites, just ahead of GIF with 62.3 percent. GIF was leading by more than 15 percent just one year ago, but more and more webmasters are now choosing PNG because if results in smaller files most of the time, supports a much wide range of colors and has better transparency options.

The only main benefit GIF still has it its supports for animation, but this is no longer used by the majority of webmasters, and advertisements typically use Adobe's Flash technology rather than GIF. There's also an animated version of PNG, named APNG, but this standard is not widely supported.

Interestingly, GIF is still more popular than PNG on the top 1,000 websites (67.9% vs. 66.3%, see our head-to-head comparison), but we can expect that to change also within the next months. The trend is very clear: for every site that changes from PNG to GIF, more than 3 sites make the change in the other direction, see our technology change report.

There are some remarkable geographical differences in the usage rate of PNG: it is very popular in Europe, with over 70% in France, Italy, Spain and Netherlands, but much less in Asia, with 41% in Japan, 34.6% in Korea and only 30.6% in China. Usage is also higher on Unix-like systems than on Windows, and Google seems to be a big PNG supporter, it is used on 95.6% of all Google Servers. 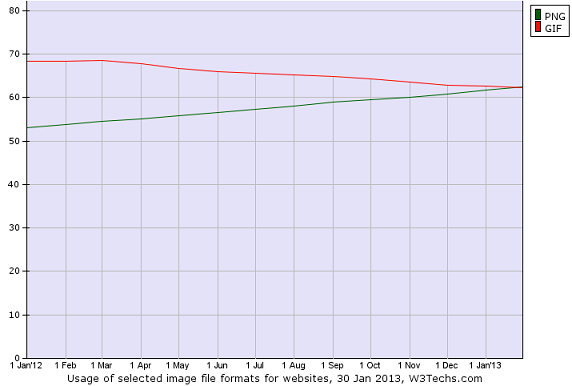