AMD desktop graphics product manager Devon Nekechuk flat out confirmed in an interview with Japanese tech site 4Gamer.net that there will be no new GPUs from his company throughout most of 2013. The Radeon HD 7000 will remain the company's prime focus, with price adjustments and possible performance enhancements delivered via driver updates.

Later this month NVIDIA is anticipated to deliver its GK110 GPU to consumers in the shape of the GeForce Titan 780, and there's also word that AMD may be planning to launch an official Radeon HD 7990, but other than that there aren't expected to be any new GPUs until the end of this year.

This announcement is indication that GPU makers have decided to slow things down from the streak of rapid new GPU launches that lasted from some time around 2007, running up to 2012, which can be heavily taxing in terms of R&D costs for either companies. We know for sure that NVIDIA is clearing its backlog of consumer GPU development by releasing the GeForce GTX "Titan" graphics card in a couple of weeks' time, and we know from older reports that NVIDIA could launch a "refreshed" GeForce Kepler lineup, that largely retains the GeForce Kepler silicon while topping up with subtle changes (clock speeds, software features that don't involve redesigning the silicon, etc.,) but AMD coming out in the open with this announcement could change everything. NVIDIA has the opportunity to save a few coins by sticking to its current lineup (plus the upcoming GTX "Titan,") and responding to competition from AMD by price-adjustments and timely driver optimizations of its own. 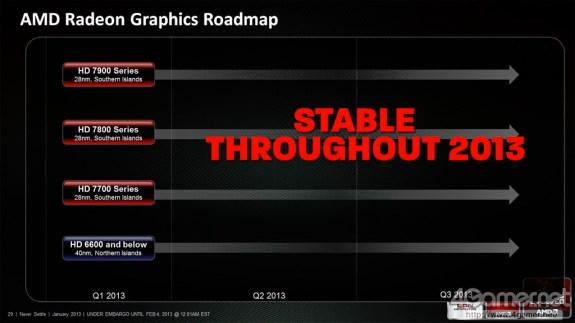