Posted on Tuesday, Mar 19 2013 @ 14:36 CET by Thomas De Maesschalck
Noctua announced owners of its older heatsinks that don't include a SecuFirm2 mounting system are able to order a free NM-i115x mounting kit upgrade to make their cooler compatible with Intel's upcoming Haswell platform.

Noctua today announced that it will continue its tradition of supplying customers with its premium-class SecuFirm2™ mounting kits for novel platforms free of charge. While newer Noctua heatsinks support Haswell's LGA1150 socket out of the box, older models can now be upgraded with the new NM-i115x kit at no additional cost.

"We're determined to provide the best possible support to our customers and over the years, we've sent many thousands of mounting kits free of charge to users who wanted to upgrade to new platforms", says Mag. Roland Mossig (Noctua CEO). "With Haswell just around the corner, we're pleased to announce that we'll extend this offer for LGA1150. Owners of older Noctua retail heatsinks that don't support LGA 115x out of the box will be able to upgrade to the new socket free of charge!"

Due to the spacing of the mounting holes being identical on LGA1150, LGA1155 and LGA1156, Noctua's previous SecuFirm2™ mounting systems for LGA115x also support Intel's upcoming 'Haswell' platform. The following Noctua coolers already include SecuFirm2™ mounting systems for LGA115x and can thus be used on LGA1150 mainboards without any upgrades or modifications: NH-C14, NH-D14, NH-C12P SE14, NH-L12, NH-L9i, NH-U12P SE2, NH-U9B SE2.

Users of older Noctua retail models that don't include a SecuFirm2™ mounting system for LGA115x can now obtain the new NM-i115x kit free of charge on Noctua's website in order to make their heatsinks compatible with the new socket. The NM-i115x kit has been tailor-made for LGA115x and features a new, sturdy one-piece backplate with fixed struts that has been specifically designed to facilitate installation on LGA115x sockets. Due to the fixed struts, it’s now even easier to align the backplate and to attach it to the mainboard.

To order the NM-i115x kit, a proof of purchase (photo, scan or screenshot of the invoice) of both an eligible Noctua CPU cooler and either an LGA115x mainboard or LGA115x CPU are required. The NM-i115x mounting kit is compatible with most Noctua retail coolers since 2005 and will also be available in stores at a low service charge. 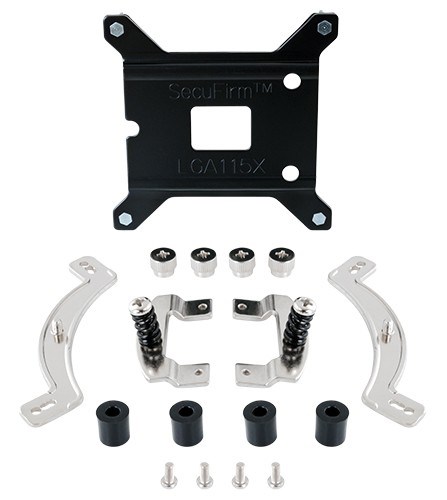