Intel Haswell to be easier to overclock

Chip giant Intel revealed at last week's Intel Developer Forum (IDF) 2013 in Beijing that Haswell will be easier to overclock. Intel said improvements have been made to the way you can overclock Haswell, making the process similar to tweaking Sandy Bridge-E CPUs.

As with Intel's HEDT platforms, not only will you be given up to 7 percent overclocking headroom to the 100 MHz default base clock, but also given the freedom to choose between three base clocks: 100 MHz, 125 MHz, and 166 MHz. The various other uncore frequency ratios will adjust themselves to compensate, and stability of these uncore components will remain unaffected.

At each of these base clocks, you will be given the same 5 to 7 percent overclocking headroom, so in theory, you could get a chip to run with a base clock of 173 MHz, while adjusting other ratios. The reason Intel cites you can't deviate from the 7 percent headroom, is that it could destabilize two important clock domains, PCI-Express and DMI-PLL. With unlocked "-K" chips, you get the freedom to step up base clock multiplier for the CPU cores all the way up to 80.0x for 100 MHz, up to 64.0x for 125 MHz, and up to 48.0x for 166 MHz; which if used right, could result in some awesome CPU clock speeds in the neighborhood of 8.00 GHz. >/blockquote> Full details can be read at TPU. 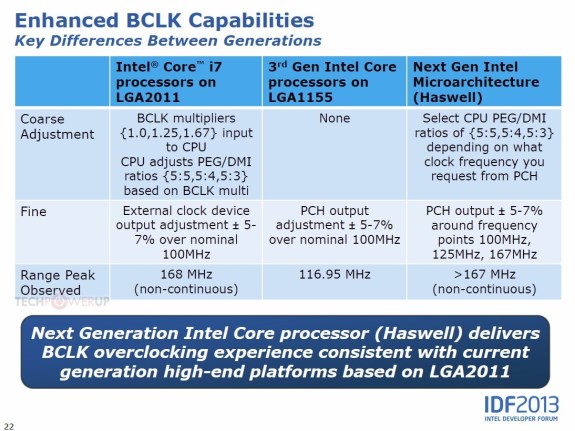