Posted on Thursday, April 18 2013 @ 13:32 CEST by Thomas De Maesschalck
About one month from now ASUS will make its entry into the storage market with the ROG RAIDR, a PCI Express 2.0 x2 solid state disk that features two SandForce SF-2281 controllers and Toshiba 19nm MLC NAND flash memory in a RAID 0 configuration.

The ROG RAIDR supports TRIM command, NCQ and SMART, despite being a RAID 0-based SSD. It is bootable, and supports Windows 8 Secure Boot. Installing an operating system on the drive doesn't require any F6 drivers, as the controller masquerades as a standard AHCI controller and a single disk, with the subunits and their RAID 0 stripe completely abstract. This way, the drive can accept TRIM commands from the OS.

ASUS will include a copy of Kaspersky Antivirus 2013 and SSD tweaking software with the ROG RAIDR. Official pricing information isn't available. 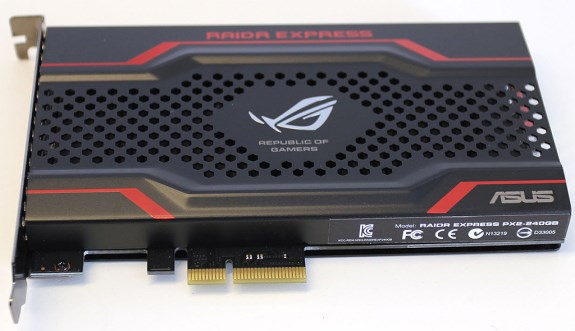