Posted on Monday, May 20 2013 @ 22:11 CEST by Thomas De Maesschalck
ThinkComputers came across what is said to be the specifications of NVIDIA's soon-to-be-released GeForce GTX 780 graphics card. If the rumor mill is right, you can expect the 780's launch in about three days.

The GeForce GTX 780 would be based on a cut down version of the GK110 core codenamed “GK110-300-A2?. Unlike the GeForce GTX Titan that has 14 streaming multiprocessors and 2688 cores the GTX 780 will have 12 streaming multiprocessors and 2304 cores. The core clock is set at 863 MHz with a turbo boost of 900 MHz. The included 3 GB of GDDR5 memory operates at 1502 MHz (6GHz effective) and will operate along a 384 bit memory bus. Power is given to the GPU by an 8+6 pin PCI Express connector and the card has a TDP of 250W. Display connectors include dual link DVI, HDMI and DisplayPort. 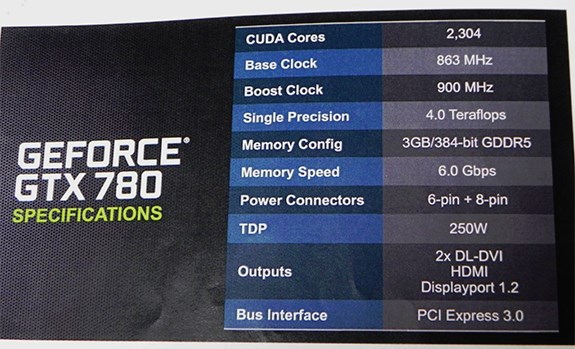