ASUS today announced the GeForce GTX 770 DirectCU II, based on the 28nm NVIDIA GTX 770 GPU, with 1536 CUDA cores and 2GB of GDDR5 memory and a 256-bit interface. The core runs at up to 1110MHz while memory is rated for 7010MHz. The card delivers strong DirectX 11 gaming that carries on from the successful GeForce GTX 600 series with more energy efficient performance. ASUS-exclusive features add value and important capabilities to this already-powerful card, providing PC gamers an attractive new option.

ASUS has implemented a redesigned DirectCU cooler on the GeForce GTX 770 DirectCU II. The all-copper heatpipes that touch the GPU core directly are engineered in an SSU shape to offer more heat dissipation capabilities without increasing shroud or cooler size. Together with sound-suppressing dual 80mm fans, the card maintains strict ASUS standards of operating 20% cooler and up to three times quieter than a reference GTX 770.

DIGI+ VRM 10-phase power delivery and Super Alloy Power components
Exclusive ASUS DIGI+ VRM digital power architecture ensures increased graphics card stability and cleaner power even during the most intense applications. It is paired with Super Alloy Power capacitors, chokes, and MOSFETs, which all use specially-formulated materials to reduce power noise by as much as 30%, eliminate buzzing, and increase graphics card longevity by up to 2.5 times in comparison to a reference card.

NVIDIA GPU Boost 2.0 technology allows for instant alternating between base GPU speed and accelerated boost frequencies, reacting automatically to GPU load. In standard 2D applications the GPU stays in base clock to conserve power consumption, while during gaming or benchmarking it transitions to variable boost clock speeds to deliver more power. Energy consumption has been added as a critical parameter taken into account, ensuring a lower power draw footprint and longer-lasting hardware. 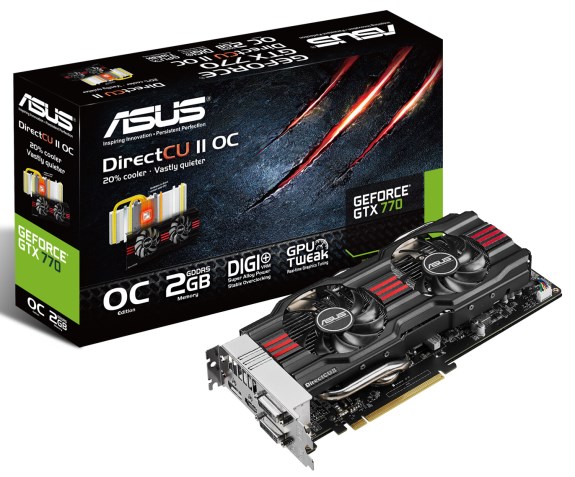