Doom: The Movie details and photos 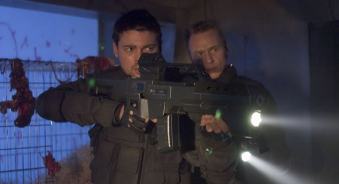 Some details emerged about the upcoming movie of Doom. The movie will be out within three months but many fans worry that it won't appeal them because they believe it won't be close enough to the game. The game is about an invasion of an off-world military installation but the location is not Mars, Deimos, or Phobos but 'Olduvai'. The production of the movie will cost $70 million and while some people already deem it as a failure here's a positive comment:

"Both The Rock and Karl Urban were fans of the original Doom game before signing on to play the roles of space marines Sarge and John, respectively. The Rock said he got to use the classic weapons like the BFG in the movie and he, Urban and the other members of the space marine cast got real military training from a former SAS member to make sure that they worked together like a real special forces team would.

All of the panel members mentioned that they were displeased that other movie adaptations of games strayed so far from the original material and while the Doom movie does have plot and character elements that the game does not have it still will be very close to how the game looks and plays. The Rock said that he saw a version of the movie a few days ago and in his words 'It really kicks ass'."

More info here and ten photos can be seen over here