Posted on Wednesday, Jul 10 2013 @ 16:01 CEST by Thomas De Maesschalck
Bright Side of News reports Nokia will soon reveal the Lumia 1020, a new Windows Phone 8 device with a 41 megapixel 1/1.2" digicam sensor from Nokia/Toshiba, a ZEISS f/2.2 lens and PureView technology. Other than that, it will also be the first Windows Phone to have 2GB RAM. It also has 32GB internal flash memory, but this is not expandable. Pricing is anticipated to be around the $600 mark (without subsidies). Nokia will also sell a $70 ergonomic grip, this accessory has a dedicated shutter button as well as a 1020mAh battery pack.

Windows Phone Central brought in the image together with a fair amount of the “confirmed” technical specifications. Aside from the assumed 1/1.2” Toshiba/Nokia enormous imaging sensor and ZEISS f/2.2 lens, PureView technology branches have merged in the Lumia 1020. In short words, this means that the unit will bring both oversampling (using that monstrous sensor) and “floating lens” optical image stabilization known from the Lumia 920/925/928. The unit will apparently be able to take 32MP and 5MP photos at the same time, with the 5MP photos delivered by merging 7 pixels into one “superpixel”, technique familiar to all PureView 808 users. It will also be able to shoot 38MP stills in 4:3 format. 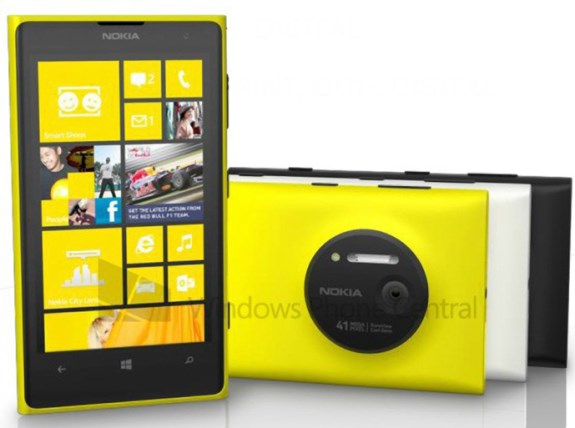