Insider resources at Microsoft revealed that the new Xbox One console was designed with a ten-year lifecycle in mind and that it is designed to be switched on for that entire period. Microsoft clearly wants to avoid another Red Ring of Death fiasco so the company put great efforts into increasing hardware reliability and the creation of a design where heat dissipation comes first. Eurogamer heard the new console is entirely silent in its idle and low-activity states and that you can barely feel any heat being dissipated from the unit's vents in these modes.

Even here, we should prepare for a much more pleasant aural experience compared to the current-gen consoles - and not just because the optical drive will be inactive during gameplay. Wired's internal photography of the Xbox One reveals a decent-quality heat sink and a relatively large fan. The larger the blades of the fan, the slower they need to spin in order to displace the same amount of air as a smaller fan, meaning a quieter unit.

Also consider the technological make-up of the AMD processor. The closest match we have in terms of PC hardware to the Xbox One graphics core is the Radeon HD 7790, which draws 85W at peak. The Xbox One version runs at lower frequencies and has two fewer compute units. AMD's Jaguar CPU architecture is also highly energy efficient - it's designed with tablets in mind. Even factoring in the DDR3, ESRAM and custom silicon, we should expect see a complete system power draw that's a world away from the 'power at all costs' approach to the launch versions of the Xbox 360 and PS3, which used in the region of 170-200W. 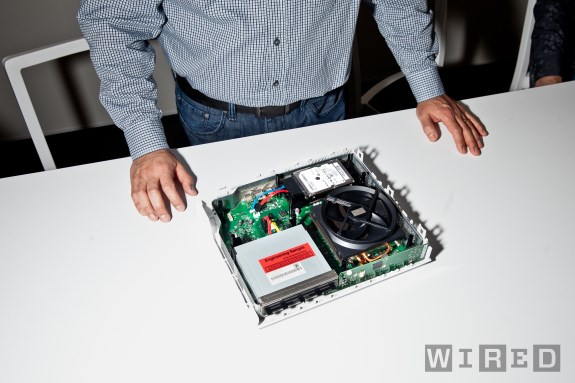