HWBot invalidates all Windows 8 submissions due to RTC bug

Popular benchmark competition site HWBOT announced it's no longer accepting benchmark records established with Windows 8 and that all previously submitted Windows 8 results have been invalidated.

The reason for this severe action is the discovery of a problem with Windows 8's real time clock (RTC). To support embedded or low-cost PCs without a hardware-based RTC, Microsoft made changes to how it measures time in Windows 8 - and HWBOT discovered that overclocking and underclocking on Windows 8 PCs can cause the operating system to no longer measure time correctly. You can read HWBOT's full statement over here.

An example of how this issue affects benchmark scores can be found in the image below. HWBOT downclocked the BCLK frequency of their Haswell system by about 6 percent from 130MHz to 122MHz. Using a CPU ratio of respectively 32x and 34x, the resulting CPU frequency remains 4160MHz. As you can see, the results after underclocking are better because the system is no longer properly measuring time: 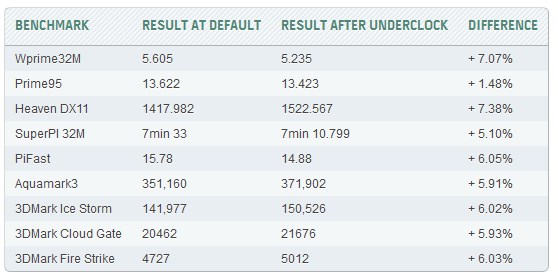 Another example can be seen in the video below where Windows time on a system with a 6 percent underclocked base clock frequency is compared with a smartphone stopwatch. After 5 minutes, Windows Time was already 18 second behind real time.

When overclocking, results are skewed in the opposite direction. By overclocking roughly 4 percent, Windows time is 3 seconds ahead of real-time after two minutes.

It's unclear when Microsoft will fix this but it's pretty important that they do so as this bug has severe implications on systems with a lower/higher BCLCK than stock. It can cause issues with applications that require an accurate clock, and besides overclocking competitions it also creates problems for hardware review websites.