Posted on Thursday, Aug 22 2013 @ 15:29 CEST by Thomas De Maesschalck
GigaOM reports about the Zeus 3D printer, an upcoming Kickstarter project that will be unveiled on September 4. Designed by AIO Robotics, this device is unique because it's the first combination of a 3D printer and a scanner. The Zeus 3D printer will have an onboard computer, enabling basic tasks like copying and even faxing 3D models to your friends.

Quartz caught that the team behind the printer posted further details in the RepRap forum this week, including that the Zeus will cost less than buying a MakerBot Replicator 3D printer and Digitizer scanner. Replicators sell for $2,199 or $2,799, and the yet-to-be-released Digitizer likely won’t be cheap either. So the Zeus will be a hefty investment considering printers like the Pirate3D Buccaneer will soon be available for a few hundred dollars.

It’s inevitable that 3D printers and scanners will more and more be integrated into one device. It sounds goofy to combine an antiquated technology like faxing with a 3D printer when it’s so easy to email 3D design files, but it helps the concept of 3D printing fit with non-technical users’ current understanding of the world. There’s no need to connect the Zeus to a laptop, as it has an on-board computer. Instead, the user is left with four buttons: scan, print, copy and fax. That’s simpler than a printer meant for paper. 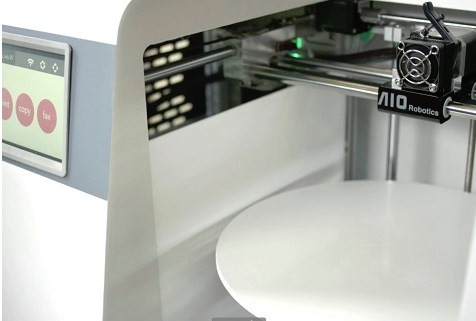