Posted on Tuesday, Aug 27 2013 @ 23:18 CEST by Thomas De Maesschalck
Microsoft revealed the design of the Xbox One main SoC at the Hot Chips conference Monday at Stanford University. Made on a 28nm HPM process by TSMC, this chip packs 5 billion transistors in 363mm² and offers 47MB of on-chip storage. Full details at TechHive.

Unfortunately, Microsoft didn’t disclose how much power that chip will consume. However, the chip will be power gated down to 2.5 percent of its power, said John Sell, a hardware architect at Microsoft who gave the Xbox One silicon presentation at Hot Chips. It will be manufactured in 28-nm process technology by TSMC, Microsoft’s foundry partner.

Nor did Microsoft disclose how fast the chip will run. All told, the Xbox One system contains 500GB of storage, 8GB of DDR3 memory and 47MB of on-die storage that can be used as cache memory.

The system CPU is based on the AMD Jaguar processor architecture; the system uses eight cores with 32 KB of instruction and data cache, with four of the cores connected to a shared 2 MB shared level-2 cache. 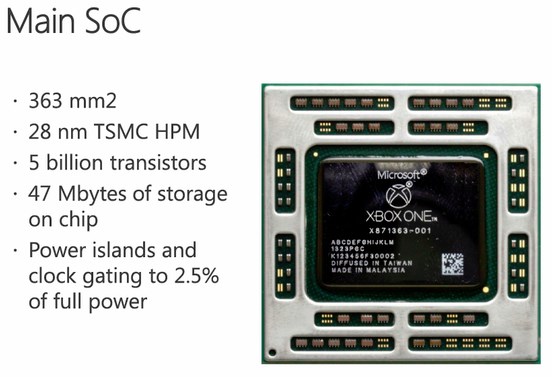