Posted on Friday, Sep 27 2013 @ 15:45 CEST by Thomas De Maesschalck
VideoCardz got its hands on a picture of the upcoming XFX Radeon R9 280X Double Dissipation graphics card. This GPU is basically an updated Radeon HD 7970 GHz Edition (Tahiti), it has 2048 stream processors, 128 TMUs, 32 ROPs, 3GB GDDR5 memory, and a 384-bit memory bus. The card is equipped with a large aluminium fin array cooled by two 100mm fans. Pricing of this non-reference card is anticipated to be around $299 - $329.

Of course R9 290X was not the only announced model. We still have slower cards like Radeon R9 280X to talk about. I’m sure that most of you will now be looking for good offers on 7k series models. There is a good reason why you should look at R200 models instead, and the example came from XFX, which is featuring a new cooler design. Here let me just say they did a great job. It looks just about perfect — slick and expensive, pretty much what you expect from a high-end graphics card for a reasonable money. The R9 280X is a HD7970 GHz Edition refresh, so yes, this is pretty much the same card, only with a new cooler. The latest leaks suggest that some 280X card will run at higher memory clock than 7970 (6.4 GHz vs 6GHz). This is probably the main difference between the 7k and R200 series.>/blockquote> 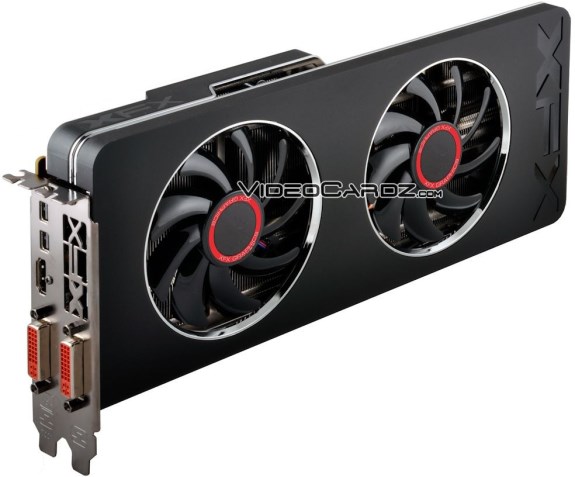