Gamers Nexus spoke to AMD Manager of APU/CPU Product Reviews James Prior and got to hear that the FX series is not end-of-life. A leaked AMD roadmap suggested that AMD may pull out of the high-end processor market but Prior claims he's never seen that slide before and that he doesn't know where it came from. Prior mentions that the real AMD roadmap looks different and does not span more than a year into the future, but the official roadmap doesn't really convince us that AMD is still committed to the high-end processor market. The roadmap below reveals the 32nm Vishera will stick around throughout 2014 without any significant updates.

AMD Manager of APU/CPU Product Reviews James Prior was quick to negate the slide's legitimacy: "I've never seen that slide before, I don't know where that came from," he told me in our call, and quickly followed-up by stating that "it's not real. FX is not end-of-life." Prior pointed-out that it's rare to ever see more than a year into the future with roadmaps, and that the real AMD roadmap looks like this. 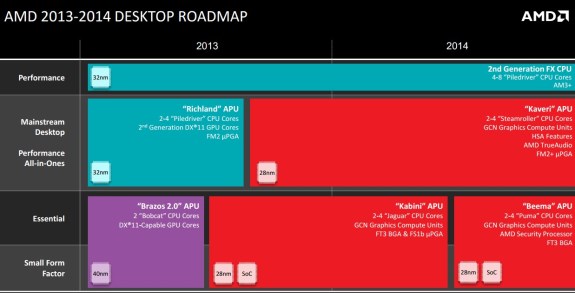