TUL Corporation, a leading manufacturer of AMD graphic cards, is going to show off several feature products during CES 2014, including the most eye-catchy model, the PowerColor PCS+ R9 290X, ready to impress everyone.

Industry-leading OC Setting with Gold Power Kit
Except the debut of PCS+ R9 290X at CES 2014, the PCS+ R9 290 is also in the limelight. The PCS+ R9 290X/290 run at the most higher frequency, which feature 1050MHz/1040MHz at core respectively, and both set the memory at 1350MHz which is 100MHz higher than ref. design, totally boost the performance to the limit. To remain the OC performance together with higher stability, PowerColor utilizes the exclusive Gold Power Kit at both PCS+ models, including Digital PWM to decrease the ripple and enhance power efficiency; the DirectFET to minimize conduction losses and the Multi Phases Design can enhance power efficiency and stability.

Powerful than ever, the PCS+ Trio Fan Design
The newest R9 290X/ 290 are employed PowerColor exclusive PCS+ trio fan design, which combines three 8015 fans, two sets of aluminum cooling fin and total 5pcs heat pipes design, offers superb cooling performance which is 24% cooler and 17% quieter than ref. design. To give the cards a real luxury feel, the PCS+ R9 290X/ 290 are built with metal back plate and metal shroud, totally make it one-of-a-kind. 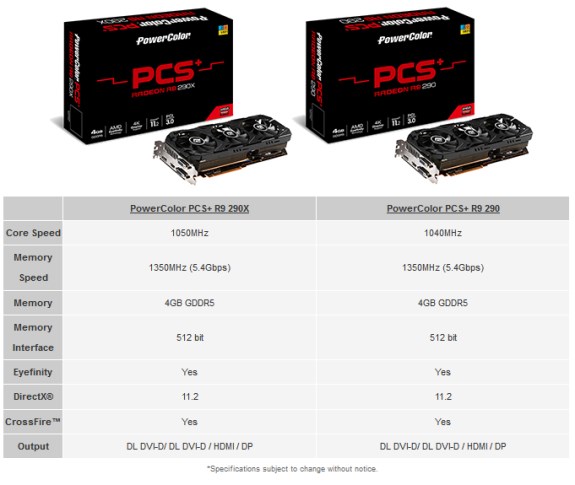