In october 2013 the brand new AMD Radeon R7 and R9 series were launched. We have just arrived in 2014 and the new product range is almost complete.

In the past years AMD worked closely together with the gaming industry.

This resulted in AMD’s Gaming Evolved program which represents the commitment to PC gamers, PC game developers and the PC gaming industry in general to deliver innovative technologies and to help the gaming industry create the best possible gaming experience on the world’s best gaming platform, the PC.

The Gaming Evolved program gave us the Never S­­­ettle game bundles, which were a game changer in the market.

Never before was such an impressive number of brand new AAA game titles bundled with graphics cards. This cooperation ensured the best possible performance with AMD’s Graphics Core Next architecture. With the launch of the new Hawaii GPU AMD announced TrueAudio and Mantle.

TrueAudio technology is a revolution when it comes to experiencing sound in games and offers developers a programmable audio pipeline enabling the most realistic 3D acoustic experience ever.

Apart from the Radeon R7 260X, 290 and 290X the brand new R7 260 supports this feature. The first game to support TrueAudio is Thief which will launch in February.

Then there is AMD Mantle, a new low level API which allows developers to program directly to the Graphics Core Next architecture.

Mantle replaces the widely used Direct X API and offers a substantial performance gain because it gets the most out of the GCN architecture.

The first game to actually run on Mantle is Battlefield 4. In 2014 many more titles running on Mantle and will be launched.

So the introduction of TrueAudio and Mantle and the launch of AAA games utilizing these technologies will spark an upgrade cycle among gamers who purchased their current Graphics card a couple of years years ago. For those gamers the Radeon R7 260 might just be card to get! It operates at clock speeds of up to 1030MHz, has 1024Mb of GDDR5 memory at 6000MHz and operates near silent with our CoolStream high performance cooling solution. Featuring AMD´s Graphics Core Next architecture, Mantle support, TrueAudio, CrossFire, Eyefinity, Powertune and ZeroCore Power technology, the R7 260 proves to be a true value overload at its price point. 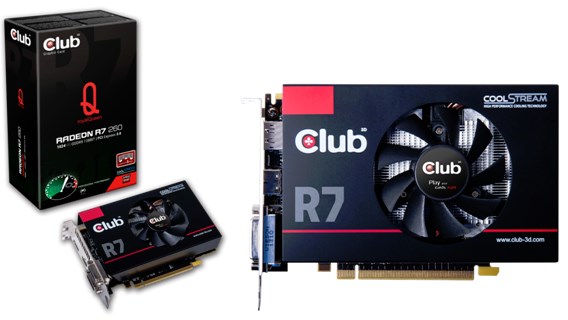