Posted on Wednesday, Jan 22 2014 @ 11:54 CET by Thomas De Maesschalck
Cisco investigated mobile malware and found that a whopping 99 percent of all attacks are targeted at Android.

The report found that 99 percent of all malware attacks are targeted at Android. The rate for iPhone users was 14 percent. Java is also a big target, as 91 percent of all web exploits appear to be focused on Java. Unsurprisingly, Cisco also found that Android users face more risks than users of any other mobile platform. Most “security encounters” involve phishing, social engineering, forcible redirects and “likejacking”. 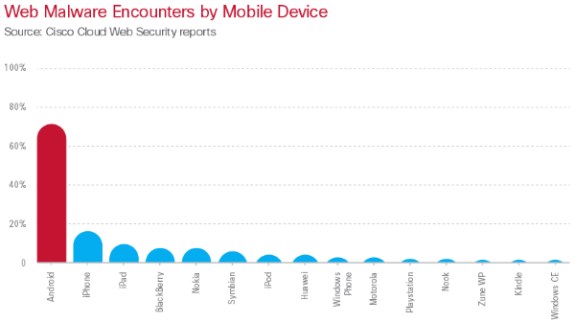