Posted on Thursday, Feb 06 2014 @ 12:36 CET by Thomas De Maesschalck
IHS reports sales of storage devices fell to 755 million units 2013, a fall from 794 million units in the previous year. This product class includes HDDs, SSDs and optical disk drives (ODDs). Sales of SSDs are booming, while sales of HDDs and ODDs are in a downward trend.

Forecasts of a further rise of 50 per cent in SSD shipping volumes this year could bring the tally to 189.6 million units shipped in 2017 - that's will be about half the number of HDDs sold per annum by that time.

HDD shipments fell 7 per cent to 444.4 million units whilst ODD sales declined even further by 12 per cent to 253.5 million units. Due to rise in smartphone and tablets, the decreasing appeal of traditional computers has definitely affected HDD sales, with consumer PC business showing a particularly evident loss. Although HDD sales have dipped there are some promising projections for the enterprise PC sector due to the elevating global economy which may lead to many businesses deciding to update their corporate PCs. 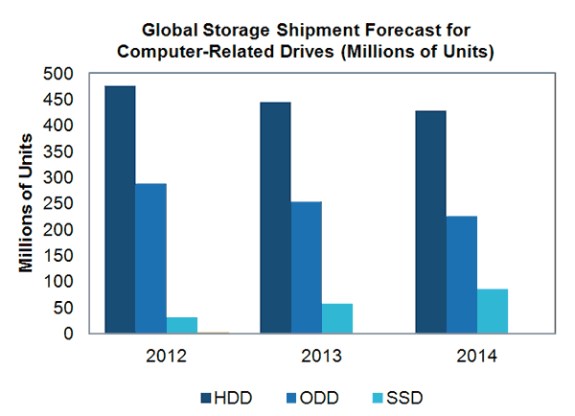