Raptr publishes list of most played games in January

Posted on Thursday, Feb 13 2014 @ 12:48 CET by Thomas De Maesschalck
Video game messenger and social networking site Raptr has published a list of the most played PC games in January 2014. The most-played game remains unchanged, Dota 2 remains the undisputed number one with a share of 7.96 percent. League of Legends swapped places with World of Warcraft and is now the second most played game. Battlefield 4 sticks to the fourth spot and Counter-Strike: Global Offensive rose from six to five.

It’s a battle for survival as the standalone version of DayZ and newcomer Rust both fought their way onto January’s Most Played Games list. Surprisingly, Rust came out ahead.

Note: The Share number by each game represents that title’s gameplay time as a percentage of the total time spent on all the PC games played by Raptr members, and is useful for comparing the relative amount of playtime between particular games. 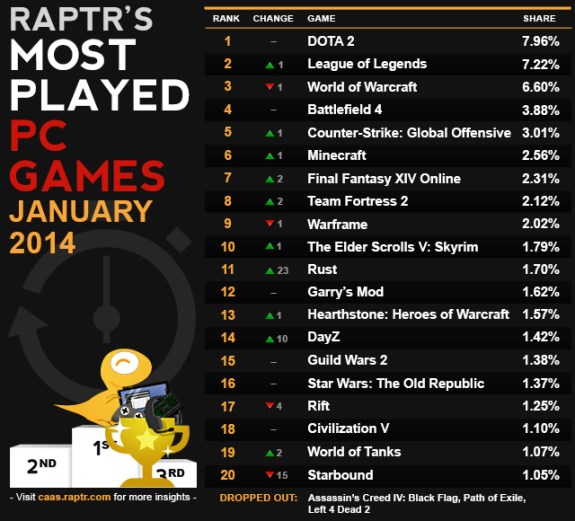