Posted on Tuesday, Feb 18 2014 @ 15:25 CET by Thomas De Maesschalck
NVIDIA's GeForce GTX 750 and GeForce GTX 750 Ti have hit the market and the web just got flooded with reviews from tech sites. Lets take a look at some reviews to see how the first Maxwell GPU performs, we start at AnandTech.

The site concludes that if the GeForce GTX 750 is an indication of what's to follow then we're in for quite an interesting time. Feature-wise Maxwell doesn't bring anything exciting to the table but in terms of efficiency Maxwell blows its predecessor out of the water. Despite remaining on the same process node as Kepler, Maxwell is able to deliver double the performance per Watt than Kepler!

Given the low power consumption the card runs remarkable cool and produces very little noise. The downside however is that NVIDIA decided not to compete with AMD on a price/performance basis, which means the GTX 750 series is not very competitive versus AMD's Radeon R7 260 series.

With that in mind, this brings us to the cards themselves. By doubling their performance-per-watt NVIDIA has significantly shifted their performance both with respect to their own product lineup and AMD’s lineup. The fact that the GTX 750 Ti is nearly 2x as fast as the GTX 650 is a significant victory for NVIDIA, and the fact that it’s nearly 3x faster than the GT 640 – officially NVIDIA’s fastest 600 series card without a PCIe power plug requirement – completely changes the sub-75W market. NVIDIA wants to leverage GM107 and the GTX 750 series to capture this market for HTPC use and OEM system upgrades alike, and they’re in a very good position to do so. Plus it goes without saying that compared to last-generation cards such as the GeForce GTX 550 Ti, NVIDIA has finally doubled their performance (and halved their power consumption!), for existing NVIDIA customers looking for a significant upgrade from older GF106/GF116 cards. 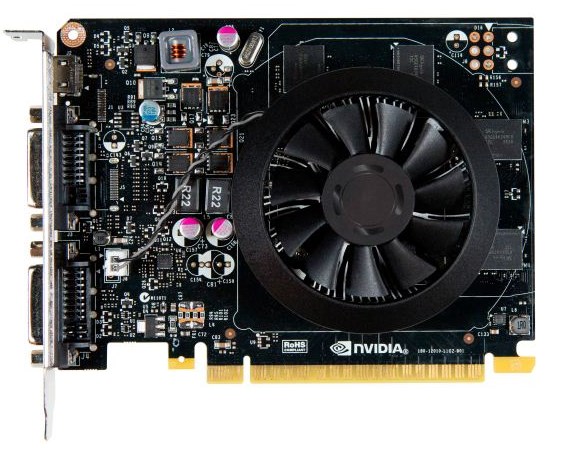