Posted on Wednesday, Mar 19 2014 @ 13:20 CET by Thomas De Maesschalck
PowerVR shows off the Wizard GR6500, a new graphics processor core that promises to enable the use of real-time ray tracing in the mobile GPU market. Full details at The Tech Report.

What does that sort of advance mean for performance? Well, the PowerVR GR6500 GPU has four "USCs," or unified shader clusters, and a total of 128 "ALU cores." The shader array is capable of over 150 GFLOPS of throughput at 600MHz (or twice that rate with FP16 datatypes.) For ray tracing, Imagination Technologies says the same GPU can process 300 million rays and 100 million dynamic triangles per second at the same clock speed.

If we were to assume an average of a single light ray per pixel, the hardware would be capable of driving a five-megapixel display at 60Hz. Realistically, though, you'll need more rays than that. Imagination Technologies' James McCombe estimates that movies average 16-32 rays per pixel in order to get a "clean" result. He notes that this first Wizard GPU is capable of tracing an average of 7-10 rays per pixel at 720p and 30Hz or 3-5 rays/pixel at 1080p and 30Hz. 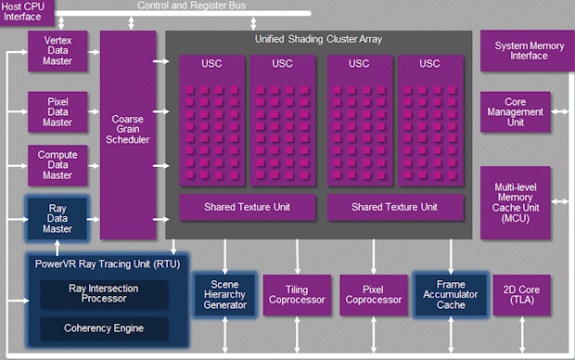