Posted on Monday, Mar 24 2014 @ 13:01 CET by Thomas De Maesschalck
ASRock recently presented its AM1 motherboard lineup for AMD's desktop Kabini processors and the AM1H-ITX definitely catches our attention. This Mini-ITX motherboard can be used with either a traditional power supply or via a DC-in jack that draws power from a standard 19V laptop power adapter!

Using a laptop power adapter makes sense if you're trying to build a cheap, compact and power efficient system. A traditional power supply is at a disadvantage in terms of size and price, and power efficiency can also be an issue as all power supplies with a rating under 80Plus Titanium offer no guarantee in regards to the power conversion rate at a load level of under 20 percent.

However, there is one big disadvantage of using a laptop adapter to power the motherboard and that is the limited potential for expansion. The motherboard includes one SATA power connector but ASRock recommends you use this for only one or two (depending on power draw) SATA devices at most.

In terms of small form factor systems, this removes the need for a bulky internal power supply (or even a pico-PSU) and changes into a console-esque arrangement, reducing the volume of the chassis needing to house the system. The motherboard itself supports two DDR3-1600 DIMM slots, a PCIe 2.0 x4 lane, a mini-PCIe slot, four SATA 6 Gbps ports (two from an ASMedia controller), a COM header, a TPM header, four USB 3.0 ports (two via ASMedia), Realtek RTL8111GR gigabit Ethernet and Realtek ALC892 audio. 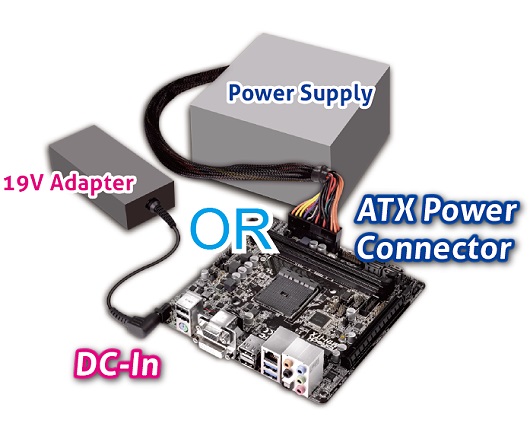