The relevancy of this remains to be seen though as the final release of DirectX 12 isn't expected until late 2015.

NVIDIA was quick to point out that only 40% of AMD Radeon video cards will support either DirectX 12 or their own Mantle API. This is because AMD has announced that for the time being, only Graphics Core Next (GCN) enabled products will support either. This means that many of AMD’s DirectX 11 cards will not be supporting either. Legit Reviews spoke with AMD at GDC last week and they said they aren’t sure exactly what will or won’t support DirectX 12 as they haven’t fully made up their minds yet. It will be interesting to see how this plays out! 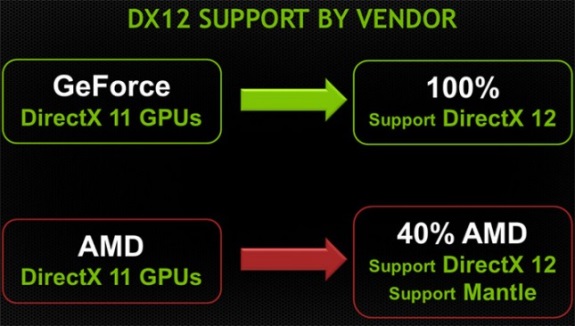